Late yesterday afternoon, I started to think about dinner and what to fix. I knew that in about 2 hours, Brent would be calling to say he was one his way home and "What's for dinner?".

In the fridge was a bowl of beef strips. Brent had originally intended on using the round roast for jerky, but it was too marbeled and gristly.  So he trimmed it all up and cut it into little strips. Hmmm, what to do with all of it? I thought of stir fry, or stroganoff, or....I wasn't sure what yet, but I knew it needed to be cooked up.

So I started out by roughly chopping a large onion and a red pepper. Using my large cast iron  skillet,  I sauteed them in enough olive oil to prevent any sticking, and to give a nice gloss to the veggies. When the onions and red pepper chunks were starting to get a well browned, I added the beef strips and a heaping tablespoon of chopped garlic.

I have been using a pair of metal tongs to toss things in my HOT cast iron pan when browning meat and veggies. I find it better than trying to stab things with a fork as it leaves the pieces intact without letting the juiciness leak out. Browning this way leaves lovely dark edges and gives a carmelized onion flavor to my dishes. Yumm!

I added in some leftover sauteed mushrooms, maybe 1/3 cup?  and added 2 packets of a dried onion and mushroom soup/dip mix. We had a ketchup container in the cupboard that had about 2 tablespoons of ketchup left in it, so I added about 1/2 cup of water to the bottle and shook. Mmmm, now I had a tomato-y start to a good gravy.

I added some seasoning salt, a dash of this and that from the spice cupboard, including a glug of A1 Steak sauce, then I added maybe 1-1/2 or 2 cups of hot water, and let the pan simmer for a little while, wishing I had a lid big enough for this skillet. (I'm wondering if the round aluminum baking sheet-think pizza pan-I have in the back of the pantry, the one with my great-great Aunt Marie's name etched into the bottom, might be large enough. I'll have to dig it out and see!)

Back to the fridge to see what was in there....some leftover green beans and corn-yes! eggs-no, apples-no. Then I spied a box of ready-made pie crust rolls that didn't get used over the holidays. Then the light bulb came on and I decided to make a meat pie. I have never done that before but I have read of them and always thought it would be too much of a bother making a real pie crust. But having them already at hand, excellent idea!

I dug out my deep dish ceramic pie pan (a wedding gift from so long ago!) and after the pie crust rolls had warmed up and lost their chill, I spread one on the bottom of the pan. Of course, it split and tore. I've yet to have one that rolls out intact. But we'll call it rustic and enjoy it!

I took half of the beef/onion/red pepper out of the pan and put it into a quart container to go into the freezer, now it's a ready made base for another dinner, another day, another recipe. I also added enough of the sauce to keep everything moist.

Then I couldn't decide how to make the sauce thick enough not to make the crust soggy. Eventually, I decided to use flour as a thickener, as opposed to corn starch, because I wanted a gravy that would heat up easily without gelling, just in case I had extra gravy. (Which as it turned out, I have about a cup of gravy to put into the freezer for another use!)

I removed the beef mixture out of the skillet, into a large bowl. I sprinkled the misture with flour, tossing to coat the individual pieces and repeated until they looked well coated.

Then I took, maybe, half a cup of flour and a cup of cold water and shook in a sealed jar until it was well mixed without lumps. I added this to the sauce in the pan and made a very thick gravy. I adusted the seasonings, adding a little more salt and some ground black pepper.

I mixed in the leftover green beans and corn to the meat and onions, then piled it all into the pie pan atop the crust. I added the gravy on top, letting it seep in and fill the pie pan. Then I rolled out the other crust onto the breadboard and tried to repair the tears as best I could. Then I transferred it to the top of the pie. I pinched the edges together around the pan and tucked them down into the pan, so they wouldn't get overly browned and dried-out while baking.

I didn't think to take a picture of the pie before I put it into the oven, but it looked like Jekyll and Hyde, or City Pie sleek / Country Pie rustic as the first half of the crust rolled out perfectly, but the second half was cracked, torn and, well, rustic looking! As the beef mixture was already hot, I put the pie into the oven (on a cookie sheet just in case I didn't get the gravy thick enough and it boiled over) at 450 degrees.

While that baked, I made a layered mixed veggie green salad, but that's another post someday. After the pie came out of the oven, and it was well-browned after 25 minutes, I decided to brush the top with some soft butter. It kept soaking in nicely, so I kept at it. I probably used two tablespoons.

After dishing up, I thought of taking a picture for a blog post. So here it is! 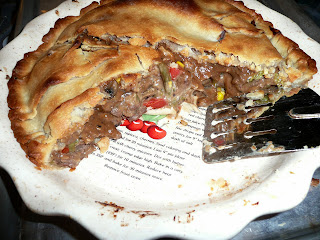 The cherries on the bottom of pie pan is a bit distracting, but you can see how yummy the crust turned out, even if it wasn't perfect! The gravy was perfect, just enough and nice and thick.

This pie gave us six hearty portions! Lots and lots of meat. Next time I will add more onions, maybe cubed potatoes or some broccoli or cauliflower. I cannot eat carrots, but I think nice thick carrot slices would look lovely in the mix.

I think the key to the perfect flakey crust bottom was having the filling already cooked and hot. I will definately do this again! What a perfect way to use up left overs!
Posted by Karen at 11:51 AM