Well, so much for an early spring, and so much for a normal spring, looks like it's going to be a very late spring. Yesterday, half way through April in the gentle Pacific Northwest, we had a snow storm! Now granted, I haven't had to scrape ice from my windshield for 2 weeks now, but just when it barely made it to 50 degrees out, we are slammed back into the thirties. We had enough huge fluffy snowflakes to whiten the roofs and lawns here at home Friday morning. It was a gray, dismal day which alternated between snow, rain, hail and sleet. It felt like January, not April. Thankfully the snow didn't stick for long. Saturday dawned clear and cold. The sun is out between the clouds now and then and the sunshine is warm, but the gusty breeze is quite cold. Glad I brought in the few annuals I couldn't resist and bought even though I haven't prepared my pots and window boxes. The sunflowers and squash seeds I started indoors last week are 6" high with roots stickout out of the little peat pots I started them in. I also had 99% germination rate on the 3 colors of giant Zinnias I started, too. Guess I'll be transplanting seedlings in the kitchen today, as it is way too cold to take them outside!
Cold or not, Saturday jobs must still be undertaken for I have wee birdies to feed! I braved the cold to refill the finch thistle seed feeders, wash and refill my three hummingbird stations and was thoroughly scolded for invading their airspace. I figured it they were that brazen while I was moving about then maybe if I held still, I might snap a few pictures. 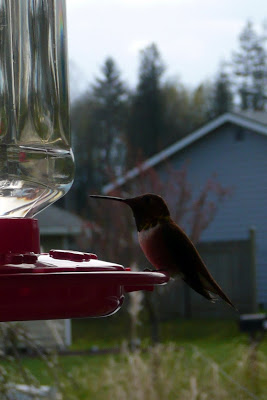 Here is a male that frequents the front porch feeder that will be replaced (soon, I hope) with a large beautiful hanging basket. 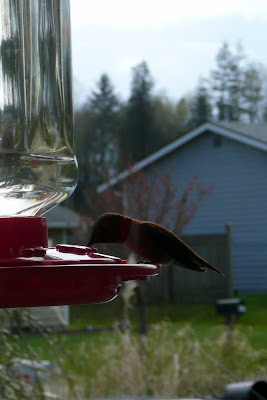 I had plans to be at the the wholesale nursery called Pacific Growers bright and early this morning, but knew by Wednesday, (when they started predicting snow) that my annual trek to the
nursery was going to have to be postponed for a week, maybe even two. Last year I didn't get there till the weekend before Mother's Day and they had already packed up the majority of their hanging baskets for delivery to the stores througout the area. I really felt that my selection was much more limited than the years that I showed up early, promising to cover them up at night to protect them from late frosts and chilly winds. I am hoping it will warm up considerably this coming week and I can get them soon!
Posted by Karen at 2:33 PM