Could she make it any easier on the guy?

My daughter's best friend will be celebrating her first year of marriage this coming Monday. That's right, they got married on Valentine's Day. Oh, and ya...it's also her birthday! Could she make it an easier on this guy?

He has one date to remember every year: February 14th. In one fell swoop he takes care of his wife's birthday, their anniversary day and the annual Sweetheart's celebration known as Valentine's Day!  I guess the bad news is 3 gifts/1 day, but then again, he has a whole year to save up!

For their 1st anniversary gift I sent the following gift: 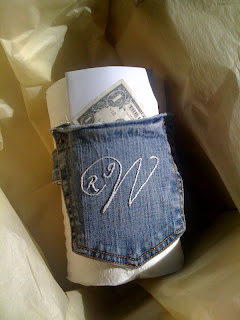 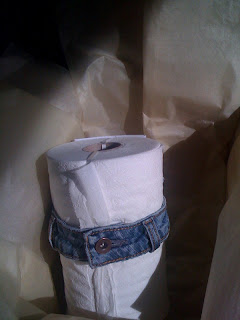 The mongrammed jeans pocket and the attached waitband encases the traditional First Anniversary Gift of Paper, three gifts actually.
One of the items in the pocket is a greeting card, inside it says:
﻿As the first anniversary is the traditional year for Paper, I send you 3 gifts of paper.

1. This card, full of best wishes for a Happy Anniversary and for 100 more!
2. Paper Money! One bill for each year of marriage!
3. The ever more practical and just as useful, bathroom tissue!

May your lives together be filled with love and laughter!
~~~~~~Happy 1st Anniversary, Jacklyn & Richard~~~~~~~~