What to my wondering eyes should appear....

I woke this morning before 7:30, as I lay there trying to decide if I wanted to be awake, I could hear the birds calling. If I listened carefully, I could hear the tinkling of the new backyard fountain through my open bedroom window even though the blinds were down. Then I heard something like a cough come through the window. That was a bit unnerving and it woke me completely out of my drowsy state. As I lay there trying to decide if I had really heard something or if I had dozed into a dream, I heard rustling noises. Okay, that was real, like someone was rifling through the empty pots in my potting area at the end of the shed.

I got out of bed and snuck into the bathroom to peek out of the open window and this is what greeted me... 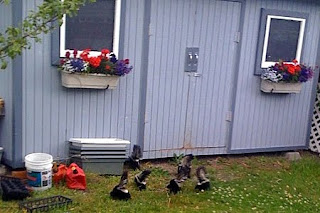 Six, count 'em, six skunk kits romping in the morning air. Baby animals have a cuteness factor of 1000, especially when the are playing! I watched them charge at each other, stomping with the front feet and skittering sideways as if they were getting ready to spray. I was enchanted by their little personalities! After a while they scooted around the corner out of sight. 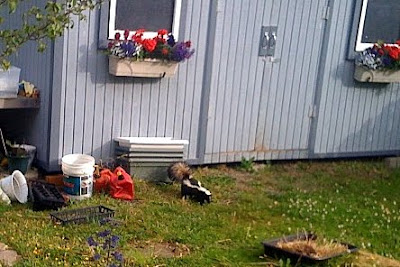 Soon Mama Skunk appeared. I watched her use her powerful front paws to tear up the grass by the roots, pulling a pile of thatch against her chest. When a clump wouldn't come up with a tug or two, she used her teeth to yank it out of the ground. She kept scooping it towards her as she backed into the hole under the shed.
Apparently, Saturday mornings are for housekeeping, even when you live under a shed.
I watched her emerge from the shed several times to take armfuls of grass back under the shed. At one point, an assembly line happened, with Mama at the front digging, she would pass the bundle down one side of herself without looking back. Then the kit pushed it back to the next, who backed up under the shed with it and disappeared.
So, DearHusband wants to know what we are going to do about it. I said, "Nothing. She's lived under the shed for at least 5 years that we've noticed." Other than having to use the shovel to scoop up the large-dog sized 'dog-logs' she pushes out from under the shed at the corner, and to pitch them into the empty lot behind the shed, she's a good neighbor, no bother at all. She's tidy, sightings are rare, strong smells have only occurred once this spring, and since she's moved in, I've seen no evidence of rats in the shed! She's earning her keep, as far as I am concerned.
I just always announce my arrival in the backyard by clanging something together or stomping my feet on the deck, so we don't startle each other with an unexpected appearance!
My only concern will be early next spring when we want to completely fence the back yard. How do we get her safely out from under the shed so she doesn't get fenced in. Hmmm, any ideas? Anyone?
Posted by Karen at 11:39 AM