As I reminisce about a special day...

As my second born, my Baby Girl (even tho' she is already an adult) is getting ready to strike out for a new locale, a new job and a new adventure, I find myself looking back...

Twenty two years ago this week, I was 'great with child' as they say. At my weekly ob check up, my doctor announced that she would be out of town the following week but would be on-call all weekend, so Sunday would be a good day to deliver.

I thought that sounded like a pretty good idea. Sunday's child is happy and wise, so the nursery rhyme goes.

I summoned my parents from Oregon, along with my Japanese sister, Mika, who was visiting the US. Brent's parents came up from Everett and we all went out to Sunday brunch, including soon-to-be-Big Sister, Sirita. It was quite the party. I had decided that this was going to be someone's birthday, and I wanted to have my family around me.

After a leisurely brunch, we headed to the mall to walk. I was sure this was going to get the ball rolling, and sure enough, I did have a couple of contractions while we made three laps around Bellis Fair Mall, which had just opened and was still under construction on one of the wings. But at least it was air conditioned, an important consideration in late August! I got a lot of funny looks when I would stop occasionally to squat down to stretch out my lower back.

We tired of the scenery and the men folks tired of trailing behind us, so they headed back to our place and all of us girls went to the fabric stores. I had a hankering to start a cross stitch project. Back then we had three fabric stores in town, so this ate up considerable time while we walked and perused my options for needlework.

Finally, I decided on a counted cross stitch pattern of a choo-choo train, loaded with various zoo animals. Once I had the pattern chart, pre-made bib and floss in hand, we headed home ourselves. I was feeling rather blue, as I was so sure labor was going to start and was a bit disappointed to be going home.

After a while, I made myself comfortable to watch TV and start stitching my bib. It was a bit crowded in our apartment with seven adults and a toddler but everyone was game to humor me and stick around, just in case.

I remember it was about 6pm when I realized the tightening of my low back and belly was getting rather strong, and seemed to be happening about every 10 minutes. I got up and walked around to see if it would continue. It did, and it grew more intense, quickly, very quickly.

I announced "It's time!". Brent, Mama and I headed back to town and the hospital. As we headed out the door, I told Brent's folks not to go anywhere, 'this isn't going to take long and you'll get to see your new grandbaby before long!"

Just as I predicted, it didn't take long. This baby was in a hurry!

The doctor announced "it's a girl!" even before she was completely born, because as soon as her head was out, out popped her whole right arm 'reaching for Daddy's wallet!" When the wallet wasn't forthcoming, that little hand clamped onto the forcep the doctor was trying to clamp the cord with! Wow! was that little fist strong! Whatta grip she had!

Three and a half hours, from start to finish, and I was holding a beautiful baby girl! She seemed so tiny compared to her 20 month old sister! Only 8 lbs 6 oz! And so precious! We had a hard time wrestling her out of Daddy's arms to share with Gramma Zanna!

We called home to let Grampa Barry, Mika and the new Big Sister know the baby was a girl and found out Brent's folks had headed home to Everett. They hadn't even made it home before the baby was already here! Ha ha! I gave 'em a big 'I Told You So, shouldda stuck around!" ha ha  Gramma Diz and Grampa Iver came back up the next morning to see their second granddaughter.

Grampa Barry left Mika in charge of putting Big Sister down for the night and came to the hospital to welcome Aizia Roxanna into the world!

Happy Birthday, Aizia!
May laughter dance along your path,
May joy and success walk with you, and
May love always light the way through
every step you take in your future!
As you strike out for new horizons and great adventures, remember Daddy and I love you with all our hearts and we will eagerly await to hear all about everything and everyone you find!
Happy Trails, Cowgirl! 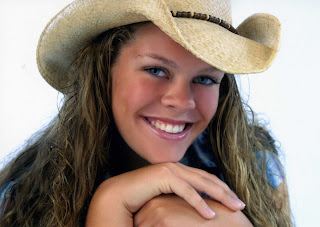